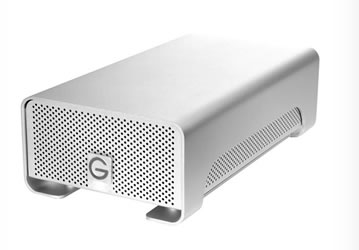 We can help you to recover data from your G-Tech RAID in the following scenarios:

I have a G-RAID drive that is not mounting on my Mac?

You can use Disk Warrior to check the integrity of the volume. If this does not work you might want to try another Mac or a different cable.

I have a G-Tech NAS setup in RAID 0 (2 X 2TB Western Digital Drives). One of the drives seems to have failed. Can you help me to recover the data?

RAID 0 is one of the riskiest types of RAID on which to store data. It only takes one disk to fail and the whole array fails. RAID 0 can be a useful configuration when you a need a high-throughput data storage device. However, it would be extremely prudent to have your data stored on another backup medium, as RAID 0 has no redundancy.

Typically, a hard disk in a NAS device can fail due to a number of different reasons. These can be electronic, firmware or mechanical failure. Our technicians can get your hard disk back to an operational state so the RAID array of your G-Tech NAS can be rebuilt and data recovered.